Venus de Milo by vs Man Under Cardigan Analysis

The chief purpose of art since the ancient times has always been to reveal the man’s emotional and intellectual connection with the outside world. Artworks whether ancient or modern, pass a message which provokes a hidden consciousness inside the viewers (Bolewski, 2011). The field of art just like the other disciplines has undergone numerous changes in the technological era. The artistic practices have been modified to exhibit the modern trends in the societies. Artistic works even on a similar subject depict numerous differences depending on the time of creation. Modern artworks have been shaped by various movements making the resulting works totally different from the past. This paper will carry out a formal analysis of two works of art one from the ancient times and another one from the modern period. The features of the artworks will also be compared and contrasted in the paper. The artworks selected are Venus de Milo by Alexandros and The Man under cardigan by Ron Mueck.

Venus de Milo is a statue (marble) initially attributed to Praxiteles but later on, confirmed to be the work of Alexandros. The work was created between 130 and 100 BC and currently stands at the Louvre Museum in Paris, France (Curtis, 2008). The sculpture is 203 cm in height and was named after its discovery location, Milos which is an island in Greek. The statue is believed to represent the Greek goddess of beauty and love, and it is also referred to as Aphrodite meaning Venus to the Romans. The statue is slightly larger than the actual size. The marble sculpture lost part of the arm and the original base following its discovery (Curtis, 2008). It is widely known for the mystery of the missing arms. Below the right breast, the statue has a hole originally filled with a metal tenon that was a support for the right arm which was carved separately. 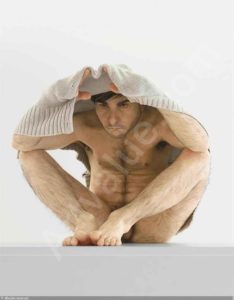 Man under cardigan by Ron Mueck

The Man under cardigan by Ron Mueck is a modern statute created in 1998 whose medium is mixed media (Christie’s, 2011). The sculpture also referred to as The Man beneath the Sweater depicts a naked man crouching on the ground grasping a sweater over himself. The sculptured man sits within a vintage lined fireplace. The artwork measures 17.3 x 18.5 x 24.8 in. (44 x 47 x 63 cm) (Christie’s, 2011). Most of Mueck’s sculptures are created on a large scale and with an exact likeness of real human beings which makes them hyper-realistic. The naked state in the statue has been used as a symbol of vulnerability and openness. The cardigan that the man tries to cover himself with depicts fear.

The two sculptures are both sacred and believed to have been created for religious purposes. Venus de Milo is an equivalent to the Roman goddess Venus depicting the mythological Aphrodite from the tale of judgment in Paris. From the story, a young prince was given an apple to present to the most beautiful in a contest of three candidates. Aphrodite bribed prince with her extraordinary beauty and ended up winning the contest. The man under Cardigan is a modern artwork believed to be advancing secularity in the religious arena. The fireplace within which the man sits s said to be a religious setting attributed to the Islamic religion. The fireplace is a sacred area for the Islam as the Imam stands in a similar area during sermons.

Even at a glance, the two sculptures are very different from one another. One is made of marble while the other is made from mixed media. The difference can be explained by the series of movement between the periods separating the sculptures. While the modern work depicts a realistic human being, the traditional work is highly edited. Although it depicts the figure of a human being, the texture and color do not resemble reality.

The sculpture of Milo de Venus was a great source of admiration and was highly protected from damage. The sculpture is still famed in the modern world, and it greatly influences the masters of modern art (Curtis, 2008). The sculpture of The man under cardigan is highly controversial and drew a lot of public attention in the initial years of the 21st century. A group of Islam protested against the display of the sculpture citing that it was a disgrace to their community. Despite this, the sculpture has been of great influence to the realistic modern artists.

The reasons why the two sculptures have gained a lot of popularity are obvious. The fact that the two are glorious works of art is undeniable. Secondly, the novelty makes the statutes outstanding. The missing arms in Venus de Milo make the artwork more recognizable. The nudity and the realistic appearance of The man under cardigan makes the work more appealing. The features give the statues brand recognition. The works find much application in the modern world including advertisements, CD covers, and toys. The statues are also good models for the upcoming artists.