Over the years Vincent van Gogh has been voted as one of the most prominent artists internationally. Today, Gogh’s artistic style is evident everywhere, especially in clothes, utensils, machines and other objects. Gogh’s enthusiasts have labeled him ‘mad’ artist because of his frenzy painting. Gogh has over 300 famous paintings and among his most celebrated artistic works, Starry Night emerges as the one of the most known artwork work globally. The Starry Night did not gain recognition in the 20th or 21st century, but in the late 19th and early 20th centuries (Post-Impressionism era) when it turned to be the turning point of migrating to new artistic styles. 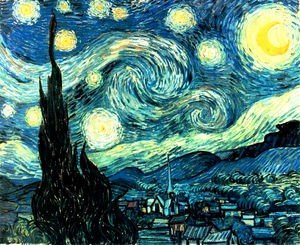 Starry Night is characterized by night sky roiling decorations, stars, glowing yellow color, moon, and blue swirls. Within the painting are two cypress trees with curling and dark branches that sway with the movement of the sky. At a distance, structured villages can be seen. The various weather collection combinations used in the Starry Night, depict Gogh’s artistic style of exhibiting several weather conditions. The deep analysis of the paint shows that Gogh used both day and night weather conditions as showcased through wind, rain, sunrise sunshine days, moonrise and overcast days. PLAGIARIZED SAMPLE ORDER YOUR PAPER NOW

The beauty and the arrangement of all parts in the Starry Night attracted many art lovers, during the Post-Impressionism era. Through Starry Night, Gogh brought new aspects to the art industry. He shifted from the traditional impressionist of connecting with nature to adopt of a feeling of agitation (Gruener 371). The use of swirl brush strokes to create the Starry Night depicted that he was in the process of pioneering the new style. His new style appeared more vibrant than earlier art.  Even though Gogh major focus was to spearhead art movement, he also had an opportunity outperform his competitors: Bernard and Gauguin. He wanted to prove his worth as an artist to his rivals.

Gogh’s Starry Night was based on weather since it was the trend of artists during the impression era. However, despite using the old approach, Gogh used imagination to come up with eye-capturing painting.  It has been proved none of the objects in the Starry Night were from scenery matches. It was a breakthrough for Gogh, an artist who had mastered the style of creating paints based on what he could see. Gogh used Starry Night painting to equate painting to playing music. Through a letter to Theo, his brother, Gogh argued that artists were like musicians and therefore, they should experience, imagine and ultimately interpret their work (Bron 26).  Gogh explained to his brother about his new thoughts of an artist being a composer, a trend that marked the movement from the Impressionism era to post-Impressionism era new style.

Starry Night was one of the Gogh’s artworks that contributed to the Early Post-Impressionism. The methods and themes of the Impressionism era had become repetitive. Therefore, it was a time to create another artistic technique, and through Gogh, the imagination approach, use of unique materials and new artistic tools was born (Gruener 371). Just like Gogh, the early Post-Impressionists started to use vibrant colors as well as quick and think strokes. The Post-Impressionist artists shifted from the reality-based artwork to work characterized by emotions and feelings. They perfected the Gogh’s new style by arbitrary choosing colors for specific objects, expressing emotions in shapes and lines and integrating foreign art influences, for example, Tahitian motifs and Japanese art.

Although Gogh was not named the father of Post-Impressionism style, his new artistic techniques in the early Post-Impressionism era laid the crucial foundation for the shift from the Impressionism era. The Starry Night artwork depicted different characteristics from the Impressionism era.  It was made on canvas, and it involved the use of simple and local materials like of oil. The Starry Night was the work of immigration that showed the experiences, feelings, and emotions of the author. In the artwork, Gogh assumed the position of the musician as he would later tell his brother through a letter. By doing so, Gogh showed that artist could express their feelings through art as musicians showcase their emotions through the music. PLAGIARIZED SAMPLE ORDER YOUR PAPER NOW