Policymakers usually suggest the imposition of the minimum wage to increase incomes and bail out workers from poverty. However, increasing the incomes of some young employees may influence other workers negatively. Ideally, minimum wages create unemployment and limit employment opportunities for the youth (KalenKosKi, 2016). Workers may miss on-the-job training opportunities that an organization could cater for by decreasing wages. Also, youths who are unable to secure jobs must be aided by their social welfare systems or by their family members. Delayed job market entry diminishes the young unskilled workers’ lifetime stream of incomes. Overall, it can be argued that minimum wages have an adverse impact on young adults and teenagers. This is a Student Sample ORDER YOUR PAPER NOW

According to the standard economic model, setting a minimum wage may increase unemployment and reduce employment. In figure 1, the demand and supply diagram of a competitive market for unskilled youth has been shown. Assuming that the market is for grocery baggers, the hourly wage of each unskilled worker is reflected on the vertical axis while the horizontal axis measures their employment. 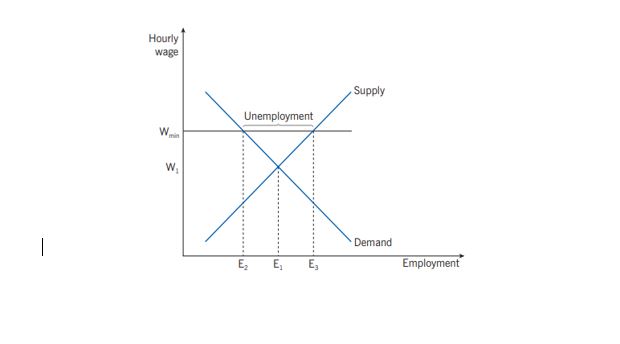 In figure 1 above, employment may be represented either as available slots for bagger jobs or hours employed. Employers in the grocery store can adjust employment by altering the hours worked or retrenching workers. The demand curve slopes downward, showing that as the hourly wage increases, grocery stores demand a fewer number of baggers (KalenKosKi, 2016). Grocery stores can handle a decrease in the number of workers in different ways like asking customers to bag their groceries. The supply curve, on the other hand, is sloping upwards, which shows that higher wage rates attract more unskilled people to the grocery bagging industry and motivate existing ones to work for long hours. Now, suppose the state sets a minimum wage on the grocery bagging market, to improve earnings of the baggers, the cost per bagger will rise, making the stores to cut-back on hiring more baggers making the bagging jobs to decrease from E1 to E2. This is a Student Sample ORDER YOUR PAPER NOW

In a labor market that is generally competitive, companies bid for highly skilled and most productive employees and the resulting distribution of wages reflects those employees’ productivity. If the state establishes a minimum wage on the market employees whose productivity declines below the minimum wage may secure few employment opportunities if any. As predicted by the basic competitive labor markets theory, a minimum wage will reduce employment if it is set above the prevailing wage rate in the market.

It is true that minimum wages increase the earnings of the low-wage unskilled youth. However, this only applies to the youth who are already on the job market. As such, it is important to note that minimum wage may delay the entry of young job seekers into the market because companies will cut-back on their recruiting activities. Furthermore, due to high wage rates, companies may delay their on-the-job training activities, making young workers unable to gain the necessary skills to climb up their employment ladders and earn more wages. Consequently, this may lead to a decline in their lifetime earnings. Based on the above analysis, it undisputable that minimum wage has adverse effects on teenagers. This is a Student Sample ORDER YOUR PAPER NOW