Fortnite Battle Royale is currently the biggest and the most addictive game among the world’s young gamers. The game was developed by Epic games and debuted in July 2017. The game received a grand reception perhaps because it was played by renowned celebrities like Drake and was the talk in multiple breakfast shows around the globe. Fortnite Battle Royale since its release has been a big phenomenon and has gained many fans (over 40 million) in a span of months around the globe. The multiplayer online game is free to play and can be played by single users or a team of not more than 20 people. It is made up of gunplay, strategizing and building of forts. Fortnite is undeniably a game that almost everyone can enjoy, unlike other games which tend to be a product of only the big gamers. Many gamers find it even more interesting due to its quick pace. There are so many reasons why the subculture portrayed by Fortnite is of great interest. The most basic reason is the fact that the game has gained much attention in a very short period which implies that it is here to stay. The selected image is an extract from the incident inside the battle bus. The main aim of this paper is to carry out an in-depth analysis of the content depicted in the image drawing closely from the popular culture. 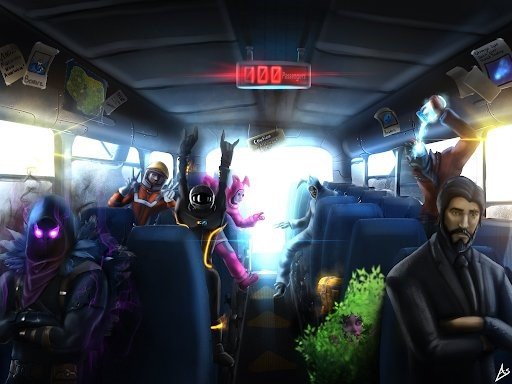 Each Fortnite game has a hundred participants who leap out of a bus that is propelled by a hot air balloon (Dean, 2018). The players fight against each other in a small island, and only one conqueror survives the fight. The image I have selected is captured inside the battle bus while the players await to leap out of it. Several characters are visible on the picture. The image reveals the faces of some players with each in a different state: calmness, fear, and aggression. The three traits are all perceptual. A man is hiding behind a bush in the bus perhaps in fear of the anticipated battle. The man could be already feeling inferior because of the attitude depicted by the other players (Dean, 2018). Another man sits in front of the bush and portrays a relaxed state. Unlike the hiding player, he seems contained and ready for the mission. He looks more human than cartoonish. At his right-hand side is another calm though scary cartoonish player. He has glowing eyes and seems to have a lot of confidence in himself. From his posture, he appears to be masculine, and everyone could be tempted to think that he will emerge the champion in the battle. There are several other players at the rear of the bus who seem highly aggressive. They too have scary cartoonish faces and are overexcited.

The image features perceptual, bodily and genre codes. The manner in which the people on the image are portrayed is interpretive and appeals to the affective domain of the human mind. For instance, the scary faces can frighten a person seeing them for the first time. Some people could be afraid of playing the game simply because of the faces. The bodily codes send a specific message to the mind. Conventionally, people who take part in battles are masculine as depicted by most of the players on the image. Fortnite is a play could better be classified as some type of action. Thus, all the events in the game should be in line with the action conventions (Chandler, 1994). The people on the image seem violent from both their faces and signs. Furthermore, the image clearly shows that the setting is dark. In most cases, battles are carried out at night.

Fortnite poses many implications both for the gamers and the societies as a whole. Ideally, a more significant percentage of the middle-aged generation is already into the game. Considering the reception, there is less likelihood that Fortnite will not disappear any soon. The codes in the game are not desirable at all drawing from the popular culture and what the society members view as norms and virtues. The emotions created as a result of playing the game are not desirable at all. Our societies highly advocate for peace and dismiss and violent behavior. Those who play the game are much likely to develop aggressive behaviors towards other people. The violent behavior could better be characterized as a rebel or challenge to the popular culture (Hebdige, 2001). There is much likelihood that they will put the behavior depicted in the game into practice. Much transpires in a human mind after coming into an encounter with violent scenes than just the fun that comes with gaming. Everyone likes trying new things especially when their peers approve them. Superiority over others is one over others especially in fighting battles is a source of identity among the youths (Hodkinson, 2015). The younger generation will definitely grow more aggressive.

The frenzy game that seemed to have emerged from nowhere has raised much parental concern. The criticisms leveled by the parents against the gaming cite either violence or language reasons. Although the characters in the video game are cartoons and not bloody, many parents feel that it is still inappropriate for their kids. The gamers use melee firearms to destroy their opponents. In some versions, the gaming might include zombies which are definitely not a good experience for the kids. Also, the game can expose younger children to offensive language as its operations are entirely based online. What worries parents, even more, is the addictive nature of the game. Although they can take control over their kids playing habits, it is not much easy to do so. The children, when denied a chance to play the game, can at times get mad. In the case where a kid is limited to a specific number of games to play, he or she is much likely to beg for more.

The signifying package of the game ought to be restructured or embraced carefully by the public. Parents should take more caution if their kids are already playing the video game. In the homesteads where the game is yet to be introduced, restraint should be practiced especially for the youngsters. Addiction should be avoided at all costs and those playing it should engage some timers and strictly stick to them. According to psychology, there are some benefits attached to gaming, and thus the Fortnite should not be banned. Although the game is founded on shooting, there are some skills that the gamers stand to acquire from the experience. Players will develop planning, creativity, and strategic thinking skills. It also teaches the essence of unity as the gamers work in collaboration to save their teams.

Modern technologies are evolving rapidly, and there is hardly a way to sieve what comes to the public arena. All that we have to do to protect our cultures is to do everything with moderation. Furthermore, change is inevitable, and if at all we desire progress we must accept change. It is vital that the parents establish some boundaries and offer their children some alternatives away from the video games. Restraint is the only way through which the modern world will survive the turbulences that come across with technology.

Dean (Director). (2018). What Happens Inside The Battle Bus Before You Drop In? Fortnite Battle Royale [Motion Picture].